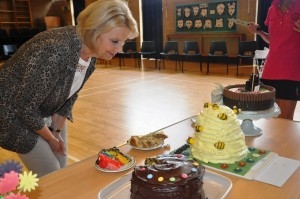 This week, we held the finals of our very first House Bake Off competition which was judged by the 2013 Great British Bake Off finalist, Christine Wallace, from Didcot.

The competition was the idea of Mrs Catherine Duff who will be teaching Cookery next year: its purpose was to encourage the children to start thinking about food and cooking as this exciting and yummy subject has been enhanced on the curriculum for the next academic year.

Mrs Duff said “I was blown away not only by the baking expertise of the children, but how they were able to inject flavour into their cakes, at the same time as creating stunning designs! The effort the children have gone to was fantastic and I am looking forward to running the competition again next year”.

The semi-finals were held two weeks ago with Mrs Duff (with help from the PE Department) undertaking the challenging task of selecting the finalists from over 100 entries, with each entrant baking at least four identical cupcakes.

Nine lucky finalists were selected who then had to bake their very own ‘Showstopper’ for Christine to judge. The cakes really were a feast for the eyes including a beehive, a Year 6 Goodbye Cake, a garden and even one covered in Flying Saucer sweets!

However, there can only be one lucky winner, who was Lara in Year 4 with her Teddy Bear’s Picnic cake. Lara will enjoy a children’s cookery course at Le Manoir aux Quat’Saisons in Great Milton, donated by Friends of The Manor (The Manor’s Parents’ Association).

Lara said “I’m really pleased to have won, the cake took me a day to make and I got my idea from the school mascot, Manor Ted. I’m now really looking forward to doing the cookery course”.