I was a pupil at The Manor 1961-67, under the Headship of Miss Welch: happy, carefree years.

Having a clear out of the attic yesterday I came across a cache of childhood treasures, undisturbed since I last moved house nearly 40 years ago, including a little booklet (done when I was 9), which stirred a pot of memories… and I thought might give you a moment’s amusement and interest in how the school has changed.

There were boys, a few, in the lower classes, but girls only in the top 2 or 3 years; and all our teachers were women, from the much loved Sister Eithne Ancila (which I thought for years was Eithne Anne Cilla – oh dear, no Latin at The Manor in those days!), Miss Priest, Miss Pope (did their names recommend them?), Mrs Owen and finally, taking the top class, the formidable Miss Welch, who was transformed by the daily proximity from scary to wonderful with no loss of authoritative force.

The plan of the school brought a lot back too – playing ‘What’s The Time Mr Wolf’ and ‘Grandmother’s Footsteps’ on the lawn behind IIA and IIB (a pre-fab); group skipping games and French elastic jumping routines on the front lawn; ‘houses’ marked out in the dust under the trees towards the road, or ‘nurses and doctors’, ‘cowboys and Indians’; the big stones on the left and sandpit on the right were springboards for other imaginative made-up games; hopscotch on the gravel at the back; then I suppose when it rained we retreated to the tithe barn, an empty but still agricultural building, and might play ‘salt cellars’ (fortune tellers made from folded paper that you moved with finger and thumb), or talk about the latest episode of The Monkees or Dr Who, pretending to be daleks. The closet a child in the ‘60s came to technology or a screen was an Etch-a-sketch!

The plan doesn’t show the little open courtyard at the back of the old house, between the coat peg corridor, the little kitchen (where vats of stew were prepared for lunch – no choice, and you sat there till you’d eaten it), the loos and dining hall (modern single storey block tacked on to the old house) and the gravel back drive, that courtyard where we have our daily bottle of milk (ugh, especially in summer when it was warm). Nor does it show the walled garden, I think it was through the tithe barn, through which we walked to get into the field between The Manor and the Senior school. We walked regularly for sports (gym, netball, lacrosse in the top year, and swimming in the outdoor (unheated?) pool – we weren’t allowed to swim if temperature was below 60 degrees fahrenheit, despite our begging to, as swimming was such a treat then and we were hardy) and for Chapel every Wednesday morning. The Chaplin was a good communicator, taught us that you don’t have to be in church to pray.

Lessons were pretty gentle I think; there was only one class in each year, and only one teacher per class, until the top two years when Maths and French were taught by specialists. We had nature lessons, but there was virtually no science, apart from a BBC course on TV. On the radio was ‘Singing Together’ – which I adored, and embedded a lifetime store of folk songs. I remember quite a lot of Art, and even more needlework (effectively embroidery), and lots of reading… but perhaps I only remember my favourite lessons! We were well-drilled for the 11+, and reasonably prepared for Common Entrance: they were the first exams we’d ever taken – no internal termly exams then.

I am glad that The Manor is still going; and I bless Miss Welch for being wise, firm, encouraging, never patronising, and yes, for a decent educational start; but more for our being “young and easy under the apple boughs… and happy as the grass was green”.

I hope your pupils will remember you with equal affection and awe in decades to come!
Sincerely,
Caro Jephcott Lamdin

I came to The Manor Preparatory School in 1972, when I was 9 years old. I have some very fond memories of my time here and, hopefully, my memory will serve me right as I recall some of them now…

My memories of how The Manor looked back then …

My very first classroom at The Manor was a pale yellow painted terrapin positioned in front of the present library. We had no lovely playground equipment like today and amused ourselves by playing elastic, cat’s cradle and skipping or clapping games at playtime. One of our favourite games was playing on the stones situated around the tree outside the Caretaker’s cottage (now Learning Support). In my first year I made a sewing kit, sewing bag and apron which I still use today. I also remember using the easels in art class which was held in what is now The Bursar’s office.

In my last year, The Head’s office was my classroom (Form V1). A large, rolling blackboard was positioned where the fireplace is now. Fountain pens were always used for handwriting (I used to spend hours practising italic writing but being left handed invariably smudged most of my work!). Some pupils found other uses for their fountain pens and the bare wooden floor boards in our classroom frequently became the target for a game of darts with various nibs being broken and fountain pens oozing their contents all over the floor. Mrs Kilgour, a fervent and enthusiastic teacher of mathematics would frequently hammer the chalk on the board saying “It’s a common denominator!”.

I can also remember the little bottles of milk for morning break (frozen in winter, warm in summer) were placed in a crate outside the door in the courtyard by The Barn, this space is still referred to as the Milk Yard today.

The Library was our Main Hall where we had assemblies and sang our hymns. At one end was a black upright piano and at the other end, a little stage where we sat at trestle tables for lunch. Some of the girls used to delight in collapsing the legs on one side of the table to create a slope, so if you forgot to hang on to your pudding it would often run away from you! School dinners were brought over from St Helen’s and St Katherine’s as there was only a small kitchen where the visitor toilets are now.

The doors to The Barn used to bring you straight into Sister Christina’s garden, Sister Christina was the nun who taught us Divinity. You can still see the wall running around the perimeter of the garden where the Dining Room and Nursery are now. The Nursery gate closest to the Main Hall was where we would walk through to get to the newly opened Abingdon bypass, A34 Bridge which was opening in 1973. All the present playing fields were farmer’s fields back then.

For all our PE lessons we had to walk over the A34 bridge to the playing fields, courts and gym at St Helen’s. The PE uniform was a heavy, grey woollen shawl-collared jumper, pale green Aertex shirt, green socks and not forgetting the green knickers!

Miss Mary Welch was the Headmistress, her office was where the School Office is now. She always brought her two Bassett Hound dogs to school with her in her yellow Volvo estate car. She adored them and they slept in their baskets in front of her desk. She also kept donkeys but luckily she kept these at home! She was an astute lady, very strict but kind with, at times, a dry but fair sense of humour.

Purchased from the second hand shop or from ‘Elliston’s’ (now ‘Debenhams’ in Oxford), the winter uniform consisted of a bottle green pinafore, pale pink checked blouse, bottle green cardigan, blazer, tweed coat, grey felt hat, beige socks, green knickers and brown shoes. Summer uniform was a straw boater, green blazer and a cotton dress, which had to be made up at home from green or pink checked material.

My favourite teacher in my first year was my lovely, smiley French teacher, Mrs Tranter whose daughter Jane was in my class. I remember her being extremely amused when I chose to draw ‘mon visage’ with my compass to get the perfect circle and she told me that it would be fine to just draw it free hand. To me, the compass had seemed just the right tool for the job!

On Friday I was delighted to be invited to a convivial chat in the Dining Room, the other guests were very special – Manor mummies and members of staff who were also pupils here. Over coffee and biscuits, out came some old whole school photographs so there was much chatter over “name that teacher” and “look at that haircut!”. There were some common stories surrounding the concrete mushrooms that used to be in the playground, tales regaled of sitting on them and jumping over them – sadly they are long since gone. Another common thread was everyone’s dislike for quiche – it must have been really bad in earlier times to manage to put everyone off it for life! The Manor’s history book was well-thumbed as pieces of The Manor’s history were unravelled around the table. It was a privilege to be included in such a special morning and we hope that we can do it more often; we are sure there are more mummies out there who were once pupils – please do join us next time. 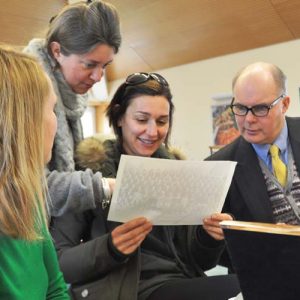 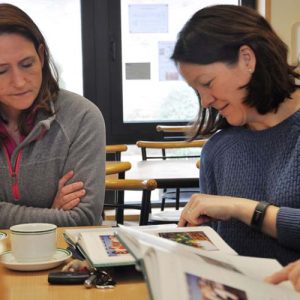 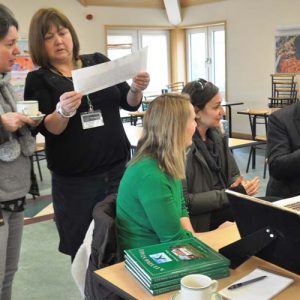 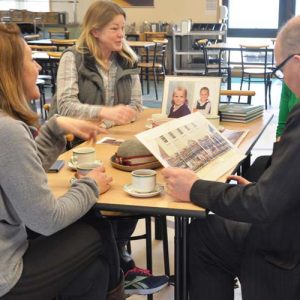 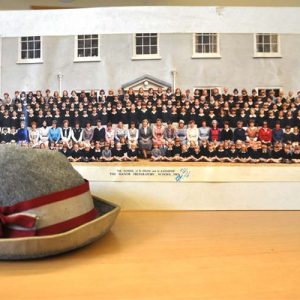 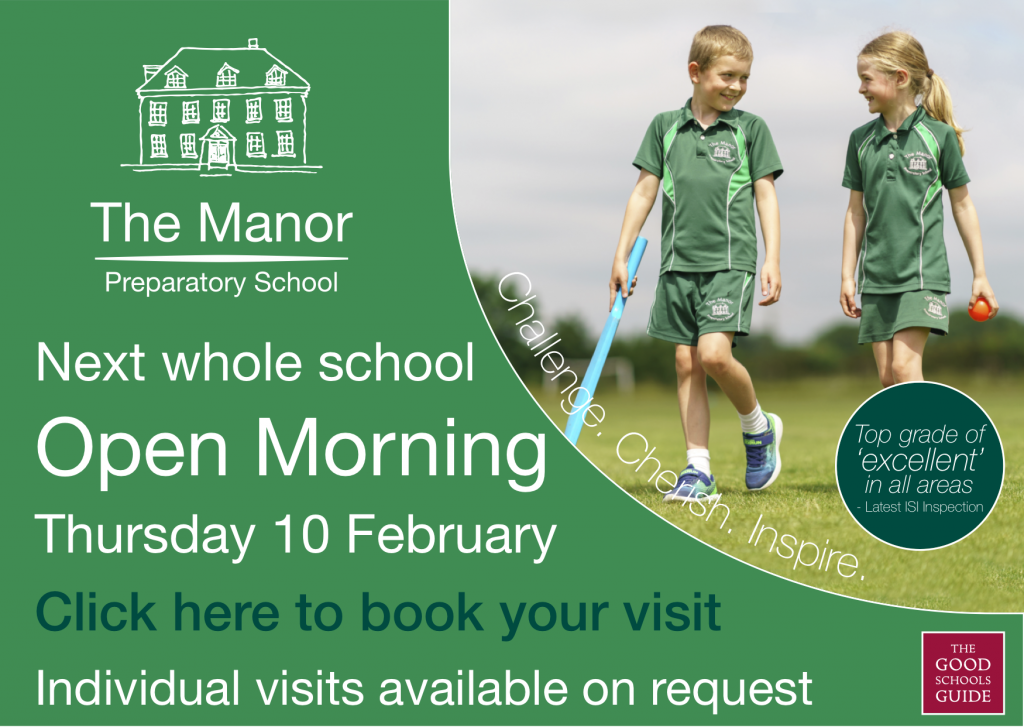