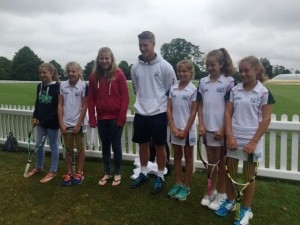 This year, The IAPS National Tennis Tournament was at Millfield Prep School in Somerset, from July 13-15. The Manor team settled into our Premier Inn on Sunday night, ready for the competition ahead!

Monday was the U12 Doubles and the pairs were:
Holly C and Alice H
Florence M and Aoife
Inès B and Georgie H
Lottie D and Bea P

Sadly, Anna W was ill but Bea P (Yr4) bravely stepped in. In our lovely new Manor tennis kit, we played really well against tough competition. At the end of the box round, Holly and Alice, Florence and Aoife and Lottie and Bea all made it to the knockout stage of the Cup, and Inès and Georgie were into the Consolation Plate. We all survived the first knockout round, but then, unluckily, Florence and Aoife and Lottie and Bea came up against tricky opponents. But Holly and Alice and Inès and Georgie did very well to win their next matches to go through to the Semi-Finals of the Cup and the Plate on Wednesday.

In Singles on Tuesday, the competition was even fiercer. Everyone fought hard in their box rounds but some nationally ranked players made later matches nearly impossible! Florence and Aoife both won their boxes and Holly and Alice also qualified for the knockouts. Everyone won their first knockout match and only had to win one more to get to Finals Day. Unfortunately, we all had to play opponents who then all got to at least the Semi Finals. Even though we all played the best we could, and had reached the last 16, the competition was too strong.

On Finals Day, we started with Georgie and Inès’ Plate Semi Final. They played brilliantly and won themselves a place in the Final. In the Cup Doubles Semi Final, Alice and Holly had a very close match against an experienced Highfield pair, with a lot of deuces, but in the end we had to settle for a medal for joint Third. Inès and Georgie were just beaten 6-4 in the Doubles Plate Final by their fast-serving opponents from Castle Court School and were Runners Up.

After a fun and exciting couple of days at Millfield, we’d had some brilliant results. A big thank you to our loud supporters, Mrs Forbes and Mrs Duff, parents, siblings and our fantastic coach Josh Crossley.