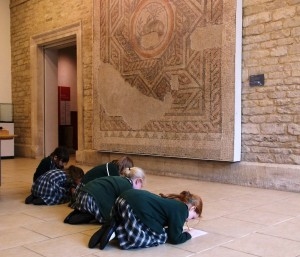 This week Year 3 visited the Corinium Museum in Cirencester as part of the Roman curriculum.

Upon arrival there was a time for a quick snack before we embarked on the museum to look atall the historical artefacts. We especially liked the Celtic people, The Roman Soldier, the Roman House, the garden and the mosaics.

As part of our day we also enjoyed some educational workshops which included tasting Roman food, dressing up in Roman clothes, making mosaics and playing the Roman games of Calculi and Knucklebone.

Before we knew it, it was time to have lunch together and return to school on the coach.

Year 3 behaved superbly and very many thanks to our parent helpers. We had a fabulous time and learned so much!