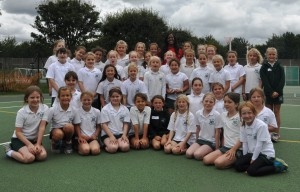 A chilly start to September was met with very warm smiles of the 38 girls across years 4 to 6 attending pre season netball when Sasha Corbin, England and Hertfordshire Mavericks player, arrived at the school.

Before she had chance to put her bag down she was given the warmest of welcomes from the girls along with plenty of questions about her netball career! On day 1 Sasha treated the girls to the real life “Solo Sessions” that she provides on You Tube, with the aim of demonstrating to the girls that becoming a star player isn’t just about playing the game but improving individual skills and becoming ‘’one with the ball’ was key. With support of the Oxfordshire County Academy coaches, the morning focused on ball skills working individually, in pairs and teams to familiarise themselves with a netball after the summer break. This progressed on to ways of getting free from your defender.

The break for lunch was welcomed by the girls to refuel ready for the afternoon where Sasha imparted her knowledge on strategies for centre passes using her mantra of “catch me if you can!” The girls then had the chance to show the coaches their new skills in matches. The day ended with a question and answer session with Sasha who shared that her athleticism meant she chose between athletics and netball which led her on the England pathway after not having really played netball before secondary school!

With the enthusiasm and knowledge from day 1 the girls returned for the second day to put their ball skills into practice with fun team games, bringing out their team spirit and competitiveness. In the afternoon the girls were placed into teams where the coaches worked on goal setting for each game to put into practice the skills they had learnt over the two days. The girls left the two days full of enthusiasm for the start of the netball season having acquired the knowledge and skills to be the best netballers they can.