The Manor U11 Netball Tournament 2015 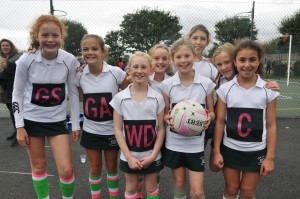 On Wednesday 7 October, The Manor hosted its annual U11 Netball Tournament, with 16 teams entered from far and wide, as well welcoming our local Oxfordshire schools. We took a chance with the weather and were so pleased to get through the whole afternoon without a spot of rain which made for an even more enjoyable tournament! There was some really fantastic netball on display from all the teams and a great time was had by all. With both a Cup and a Plate section, this gave opportunity and lots of match play to all the teams. Congratulations to Guildford High who won both the Cup and the Plate with their A and B teams respectively!

U11A Team Report by Mrs Forbes
The U11A team started strong from the very first game, securing a clean sweep of wins in the first round that qualified them for a place in Cup section. They continued to shine throughout the next stages, with their whole team defensive work, gaining them so much possession of the ball which comfortably took them through to a place in the Final against Guildford High, who had also had outstanding performances to win all of their games as well. Nerves got the better of both teams in the first half, with both making unpredicted errors. The score at half time was 2-2 – tense! The final 6 minutes was tough going for our Manor girls but Guildford High got into their stride in the second half to win the Tournament.  I was delighted with U11A team who played  some brilliant netball throughout the tournament, finishing a very respectable Runner-Up in the Cup Section.

Player of the Tournament: Freya W

U11B Team Report by Miss Watson
The Manor B team played some tremendous netball, winning their first game 11-0. Some fantastic shooting from Bea S made it possible for them to qualify for the Cup as it came down to goal difference after playing a few stronger teams in their pool. Unfortunately, the knock-out rounds brought us up against The Manor A, so we missed out on the semi-finals. I am very proud of the B team as they exceeded my expectations and all played so hard and at the best level I have ever seen.

Player of the Tournament: Georgia H

Results for Both Teams