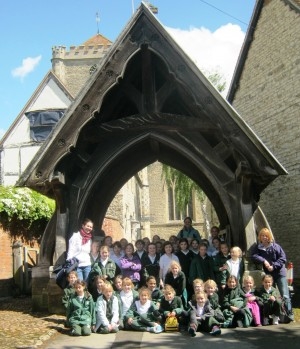 This May, Year 3 embarked on a day trip to Dorchester Abbey.

Joined by the Abbey’s Education Officer, Margaret Craig, the girls entered silently and were asked to describe what they could see, here, feel and even smell once inside.

During the morning the children took part in various activities including a tour of the Abbey where they learnt about St Birinus, followed by Mrs Hayward-Moss describing the story behind the Jesse Window, brass rubbing with Mrs Williams and a traffic survey with Mrs Plater.

After a busy morning, there was a short tour of the town of Dorchester and some fun and games in the playground before returning to The Manor ready for home time.

Thank you to Dorchester Abbey for an educational trip and to Mrs Hayward-Moss, Mrs Williams and Mrs Plater for organising the day.