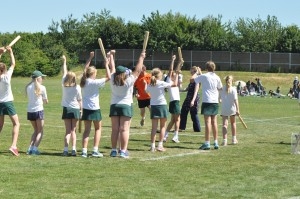 Yesterday marked the annual Staff v Year 6 Rounders match, and what a match it was!

There were three innings so that each Year 6 Class had their turn to try and defeat the staff team.

The players, both staff and pupils, were ably supported by years 3-5 on the sidelines with banners and lots of cheering, whilst also being entertained by Mr Butler on the microphone interviewing players both on and off the field and even during the games – at one point Mr Heyworth had to abandon his interview to chase the ball as it quickly flew past him!

The atmosphere on the field was lovely with everyone enjoying themselves in the sunshine, the perfect way to spend a summer’s afternoon.

And who won… for the first time in a number of years… the staff! Well done team!