All aboard for Pirate Day 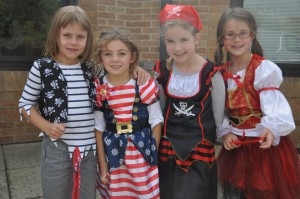 The Year 1 pirates boarded the ship ‘The Revenge’ at the start of their pirate day. The crew quickly got busy trying out different pirate tasks and activities and made dice, doubloons, flags, ship’s biscuits, draw-string bags for their gold, ink for map making, eye patches and knots. They also performed vital tasks such as scrubbing the deck, steering the ship to the port or starboard side and catching rats!

Before lunch, Captain Calico Jack took his crew on a treasure hunt, creeping across the playground so as not to be seen by ‘The Little People’ in Pre-Nursery!

A treasure chest full of Blackbeard’s jewels was found and safely returned to ‘The Revenge’.

More pirate skills were learned in the afternoon as the new recruits enjoyed a pirate boot-camp. They used flags to create semaphore messages, learnt the drill for firing a cannon, practised their rope throwing skills and worked in a team to cross the ‘Stinky Swamp’.

By the end of the day the new team had passed the test and were fully-fledged pirates. A fun day was had by all! Many thanks to Mr Arrowood for helping with one of the activities and allowing the children to enjoy the full range of activities.